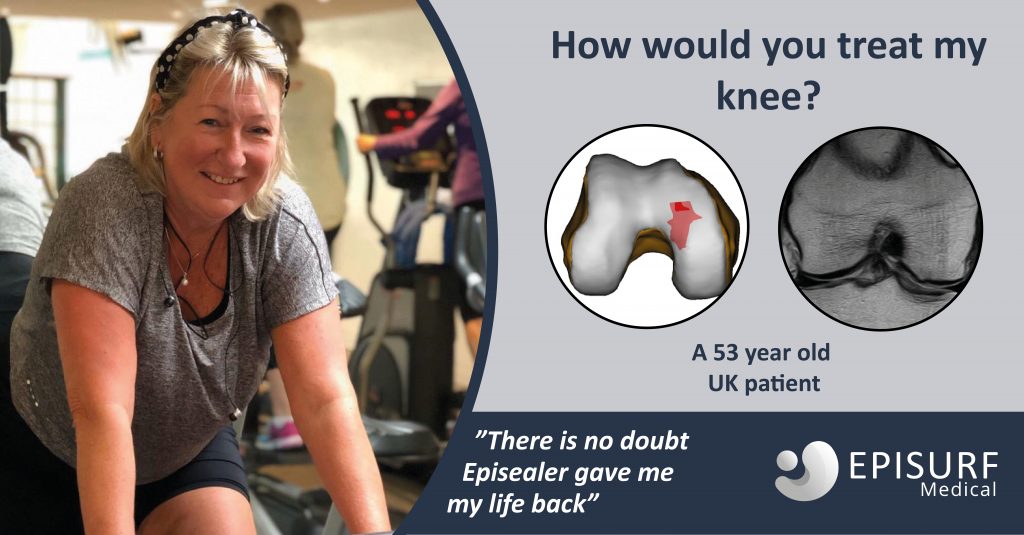 Roughly ten years ago, my knee became very painful when kneeling. It felt like needles being pushed into the inner of my right knee.

How was your knee initially treated?

I had a steroid injection at my doctor’s practice, which seemed to help for about six months. They injected the knee again, but after a further six months, the pain returned, and I was referred to a consultant at Warwick hospital. During this time, I was receiving physiotherapy and tried to keep up my regular sessions at the gym. After a scan and further hospital appointments, I had an arthroscopy which showed additional damage to the cartilage. They also treated a torn meniscus. Unfortunately, that did not work and left my mobility in a worse state. At this point, I was referred to my surgeon. Over a few years, my knee deteriorated and I was fitted with a knee brace as the knee kept giving way. During this time, I had another arthroscopy, numerous appointments and scans. Still, the damage was not considered to be sufficient for a full or half knee replacement.

When did you hear about Episealer?

My surgeon was determined to find the right treatment that he thought would improve my lifestyle. The Episealer surgery was most definitely the one. I was the first to have this procedure done at Warwick but had total faith in my surgeon and the reports I had read on this operation; I was not disappointed.

How would you describe the rehabilitation and recovery after surgery?

You have to be prepared to put in the hard work with the physio after the operation, particularly in the first twelve months, but there is no doubt it gave me my life back.

How is your life today?

The brace which I had worn for seven years was no longer needed. And now three years on, my gym sessions are almost back to my routines of ten years ago. I still hesitate a little when I go to kneel down, but that is a small price to pay for such a successful procedure. My huge thanks to all involved.